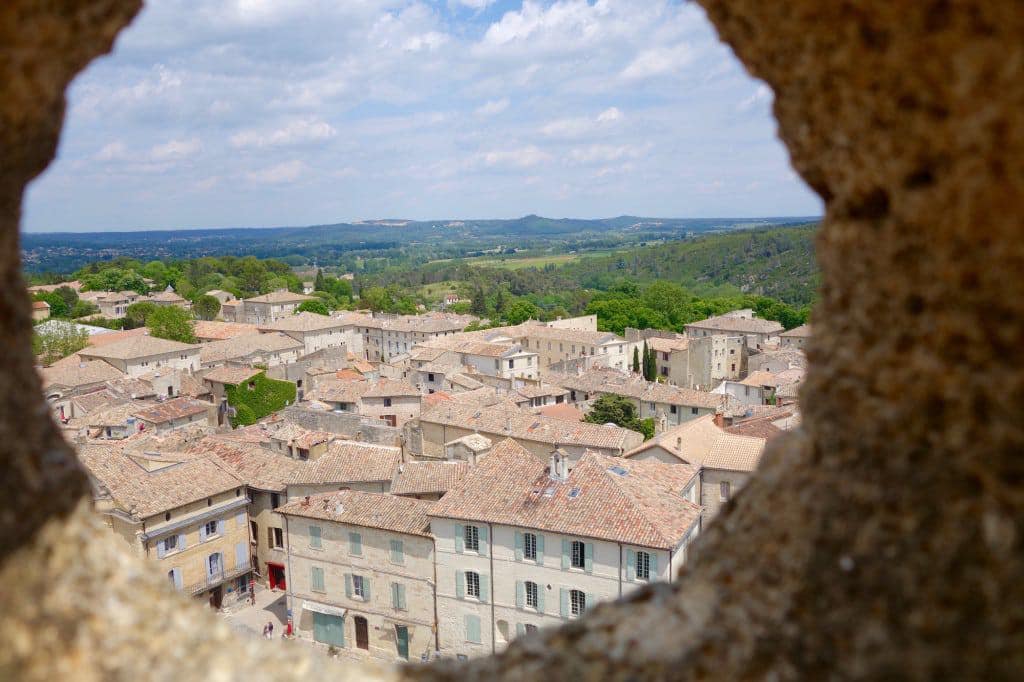 We just completed a stunning 8-day guided tour of Provence (and a bit of the Languedoc, too).  This was necessarily just a few of the highlights of Provence, as there is just so much to see and do in this historic and beautiful area. The focus was on the history and the culture of this fabled part of France, punctuated by its beauty, its food, its wines, and its lifestyle. The Mediterranean climate, the rugged terrain, with vineyards, olive groves, and lavender-covered hills and fields, the archaeological and architectural remnants of Roman through Medieval and Renaissance times, the scintillating scenery, and the careful safeguarding of the area’s resources and environment, perpetuate a history that has captivated tourists for centuries. Provence is a magnet that draws all who discover it, back again and again. In a 3-part series, we recap our tour of Provence below over the span of a few weeks. Enjoy the journey, and we hope to see you next time!

After being picked up at either Marseille Airport or the Aix-en-Provence TGV station, our guests were transported directly to a Provençal château hotel, the “Relais de la Magdeleine”, for the first night. This is an old-fashioned country house like so many which existed in Provence, with the ambiance that that implies. Relaxation after long journeys was the order of the day, with a delightful dinner in the evening. 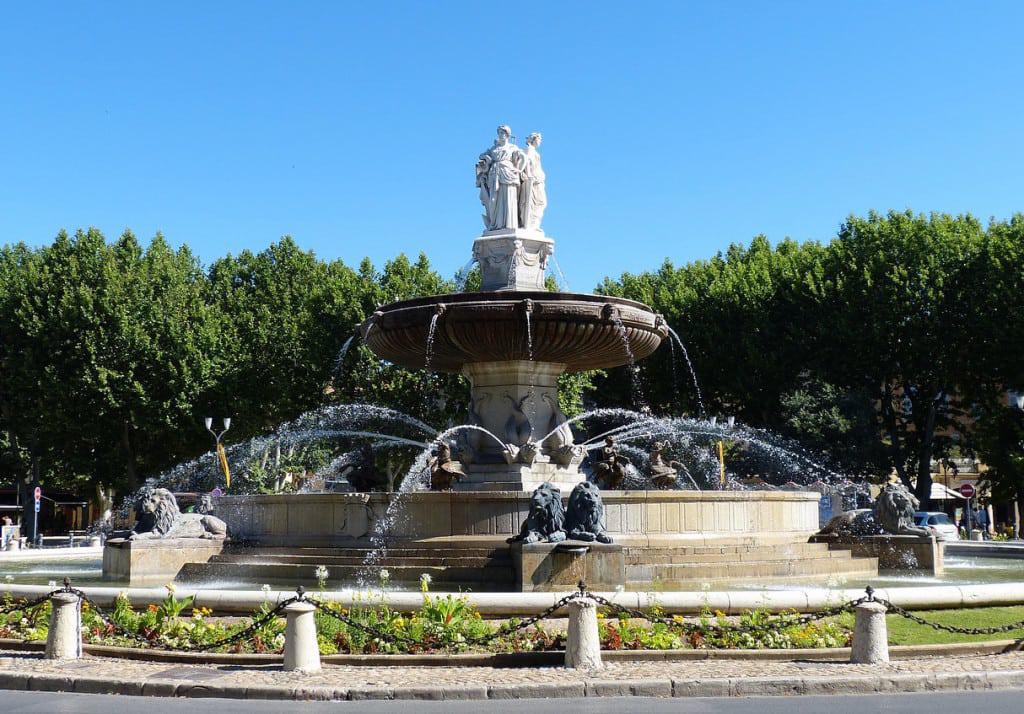 Vibrant Aix-en-Provence was our destination today. A thriving University town, it was once an important Roman location. We arrived at its famous Fountain at the Rotonde, and strolled up the Cours Mirabeau, with its flowing fountains, to visit the Musée Granet, dedicated to Cezanne, as well as the Chapelle Granet, with its remarkable collection of works collected by Jean Planque. Everyone was impressed by both the architectural simplicity of this renovated XVI century chapel, and the amazing diversity of its collection which included artists as diverse as Cezanne, Monet, Picasso, Dufy, Léger, de Staël, Klee and Dubuffet. 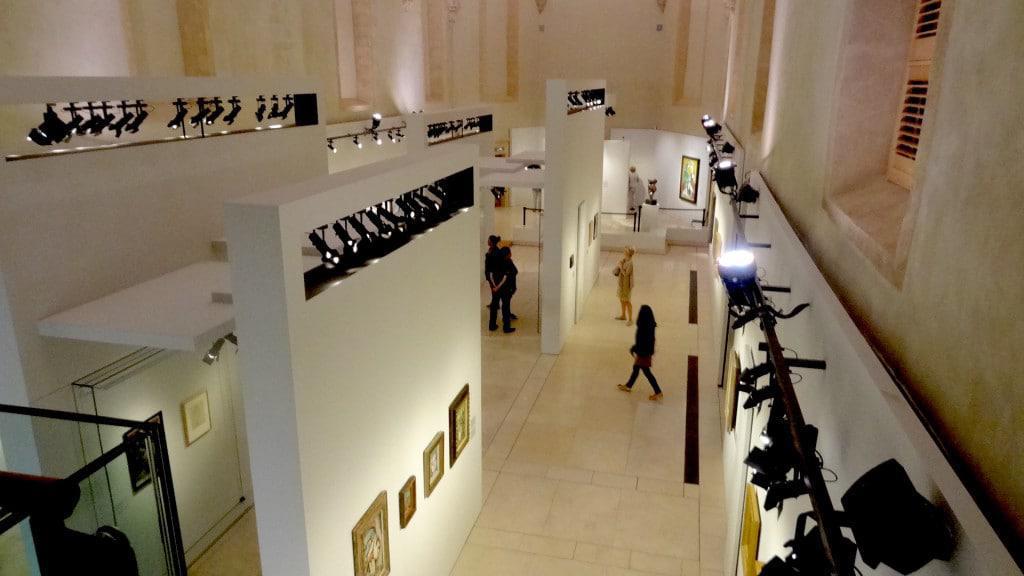 This was followed by a visit to wonderfully restored Centre Caumont d’Art, where it was the last day of the Turner Exhibition. An unexpectedly vivid exhibition of one of the most iconic English painters of the XIX century. This gem of an 18th century “Hotel Particulier” has been restored to its original glory, and is itself as interesting and impressive as the art exhibitions that it houses.

A convivial lunch followed in the gilded confines of Les Deux Garcons, a restaurant in a historic monument and much frequented by Cezanne in his time, as well as, over the ages, by the likes of Emile Zola, Minstinguett, André Maurois, Churchill, Sarre, Picasso, Bosco, Piaf, Cendrars, Trenet, Delon, Belmondo, Tino Rossi, and Jean Cocteau.

After lunch, a visit to the Cezanne family House, the Bastide du Jas de Bouffan, soon to be rescued from years of neglect, and lastly a visit to the somber but impressive Camp des Milles, Memorial to the thousands deported from Aix by the Nazis. Dinner at the Relais de la Magdeleine. 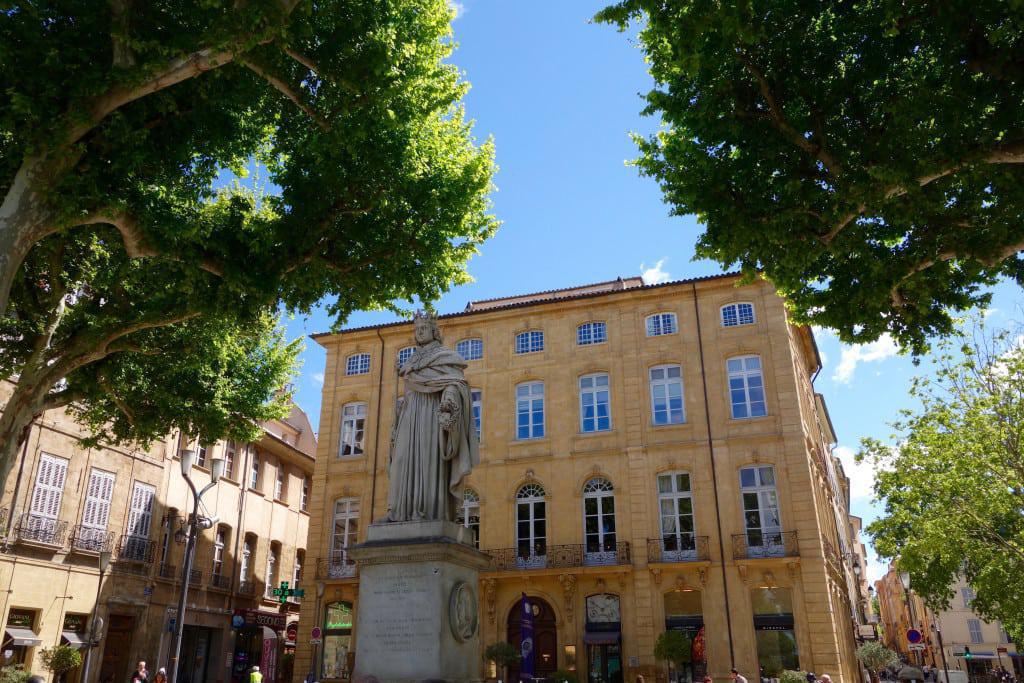 The second largest city in France is Marseille and was our focus today.  Located in stupendously beautiful scenery on the coast, its history reflects much of the civilizing influences of the Mediterranean world, including the Phoenicians, who first settled here in 600BC, and the Greeks and the Romans. Marseille is undergoing a deserved tourist renaissance that reflects its architectural and artistic revitalization. 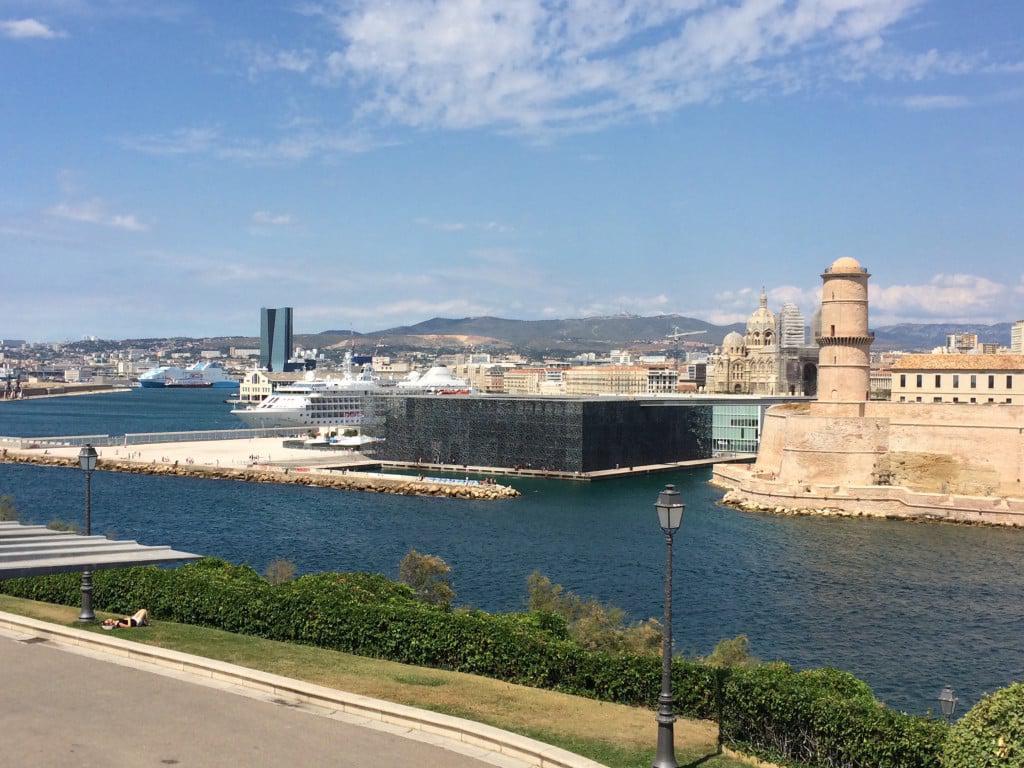 The Port of Marseille

From its picturesque old port to the stunning modernity of the “Museum of the Civilizations of Europe and the Mediterranean” (“MUCEM”), there is a plethora of sites to see, including many museums, art galleries, basilicas, abbeys, and fortifications. As most museums in France are closed on Mondays, we set out to explore the centre of the city on foot. 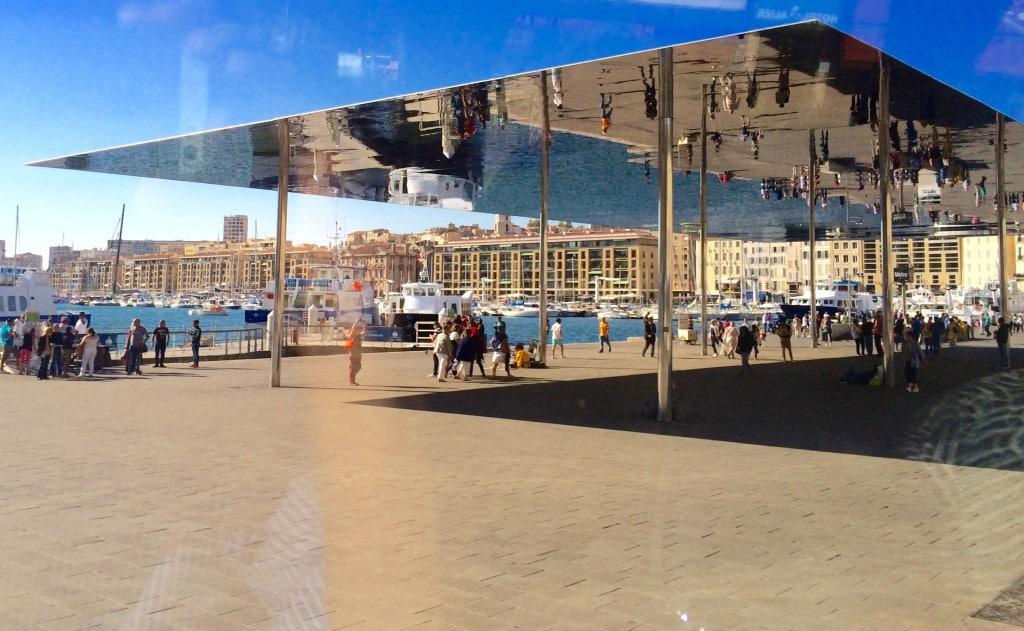 We began at the Palais du Pharo, just for its stunning view over the city and the port. From there we strolled to the Port, stopping to visit the Basilique St. Victor (first built in the 5th century, destroyed by the Saracens and rebuilt in 1040 as a fortress), then arriving at the “Quai de Rive Neuve” and to the Norman Foster-designed “upside-down” mirror that shades the “Quai de la Fraternité” where the Fish Market is located and from where the ferries go to the coastal islands.

From there we continued along the other side of the Port, the “Quai de Port”, until turning past the Baroque-style City Hall into the Panier Quarter, visiting the Centre de la Vieille Charité, an attractive “hospice” built in the 100 years beginning in 1674. From there we passed the colossal Cathedral de la Major, built in 1852 at the initiative of Napoleon III, and ending at the very modern MUCEM, where we partook of a spectacular lunch of delicious flavours at Le Môle, a restaurant of 3 star chef, Gérald Passédat, with its stunning views over the harbour. 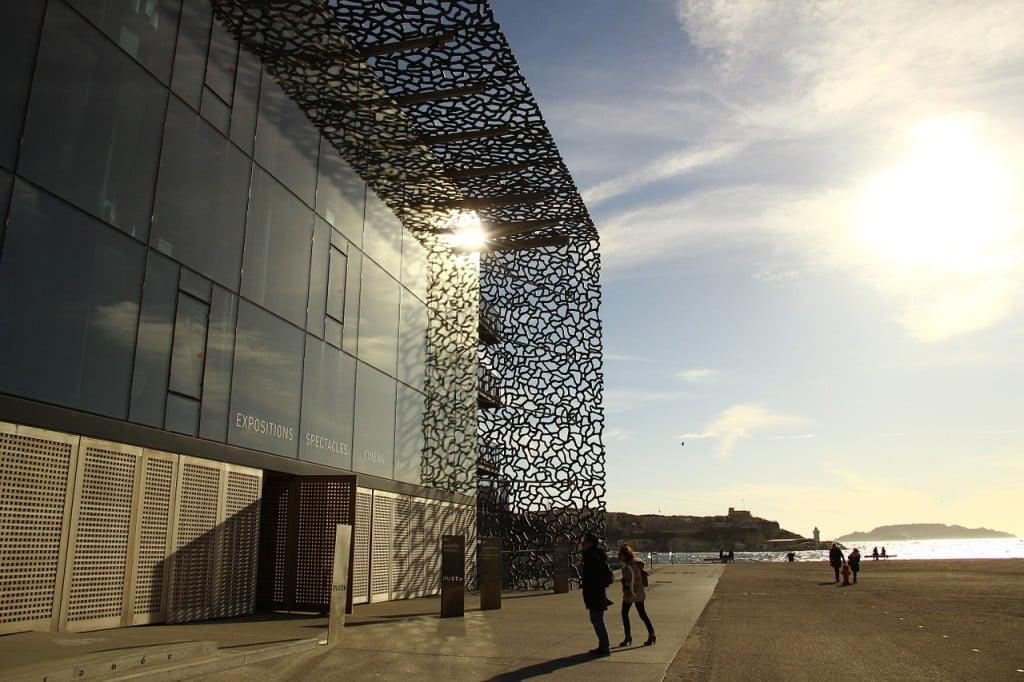 After lunch, a brief visit over the connecting bridge to the renovated “Fort Saint-Jean”, with its tremendous views of the Old Port and the city. We observed the area that was destroyed by the Gestapo in 1943 – in all 1494 buildings were dynamited – and rebuilt in the less than beautiful architecture of the post-war period.

In the afternoon, after stopping at Les Terrasses du Port for a shopping opportunity, we drove up to the Basilica of Notre Dame de la Garde, perched on the highest point within the city with simply stunning 360 degree views. A surprisingly intimate interior seemed appropriate to its very sea-oriented contents. 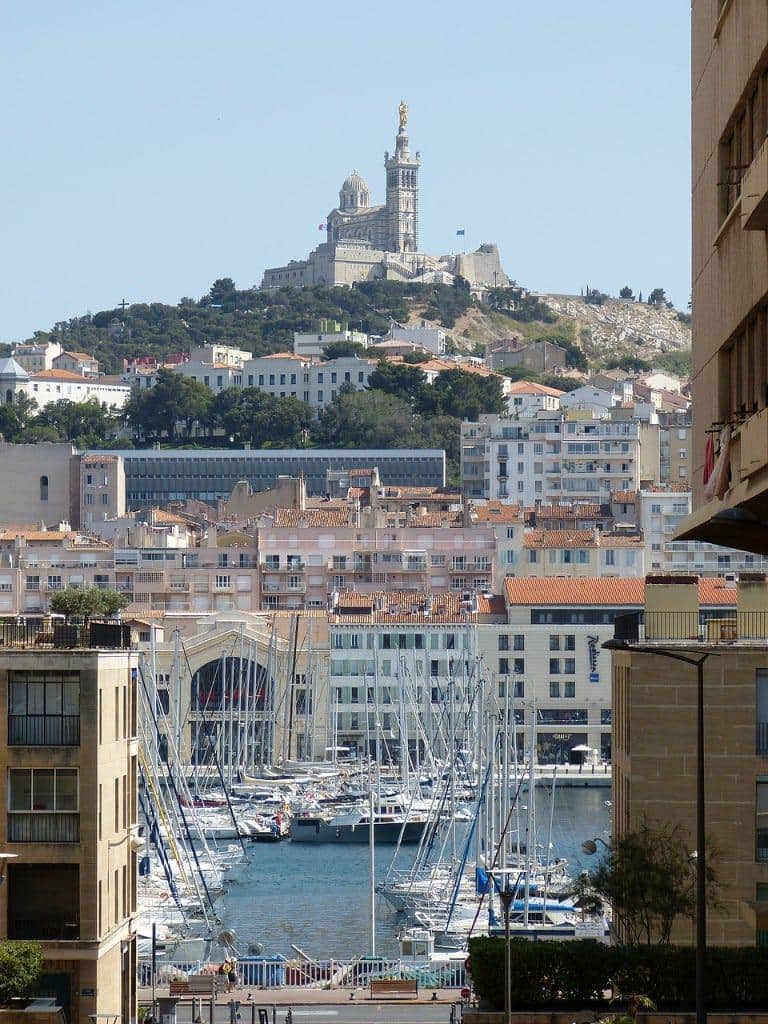 From there, we took the scenic route to Cassis, the small fishing village that is now one of the most sought-after vacation spots in Provence. We were royally entertained, with a “degustation” of the lovely white wines of Cassis, by our friends Jean-Pierre and Daniele Teisseire at their home. Danielle was a French exchange student at Susie’s High School in Chicago. Her husband has been mayor of Cassis and Vice-President of the Urban Conglomerate Marseille/Cassis. So we had access to considerable local knowledge ! They joined us for a seafood dinner at Chez Gilbert at the Port, after which we returned to the Relais.

Stay tuned next week for Part Two of our Provence Tour!