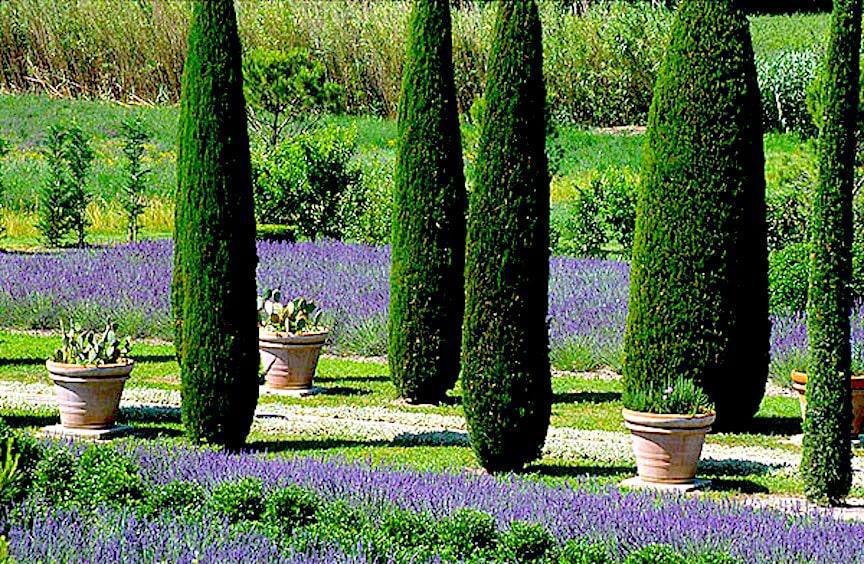 Join us for an 8 day Guided Tour of the highlights of Provence, commencing with four days in a lovely Château-Hotel near Cassis, followed by two days near St.Remy in a delightful Relais et Châteaux Hotel, and ending with two days at a boutique hotel in Uzès.  The focus is on the history and the culture of this fabled part of France, punctuated by its beauty, its food, its wines, and its lifestyle. The Mediterranean climate, its rugged terrain, with vine, olive, and lavender covered hills and fields, the archaeological and architectural remnants of Roman through Medieval and Renaissance times, the scintillating scenery, and careful safeguarding of the area’s resources and environment perpetuate a history that has captivated tourists for centuries. Provence is a magnet that draws all who discover it, back again and again. Join us in September 2016.

The tour is organized and led by Adrian & Susan Doull, who have a home in Uzès, and who have many years’ experience in leading visitors on international travels, as well as many years of hosting guests at their Château-Hotel in Picardie.

We start at what has been one of our favourite hotels, convenient for visiting Marseille, Cassis and Aix-en-Provence. It is a 29 bedroom Bastide, offering all the charm of Provence in its antique furnished rooms, its Grande Allée, and its perfectly peaceful garden, where we will dine outside. From there we will move to Les-Baux-de-Provence, near St.Remy, to an exceptional hotel, with exceptional restaurants. The last two nights will be spent in a boutique hotel in Uzès, a gem of a Provençal town, which has preserved wonderfully the attractive architecture from its rich, silk industry past and which survived being the scene of much religious conflict in earlier centuries.

Daily sorties will include Aix-en-Provence, Marseille, Cassis, St. Remy-de-Provence, Les Baux de Provence, Avignon, Arles and Nîmes. As we will be out touring around most days, we have planned the lunch arrangements at various restaurants, and will spend most of the evenings dining at our accommodation.

A summary of the preliminary itinerary is outlined below. Please note that the program is subject to change.

The trip begins at the Avignon TGV station. For those coming from Paris, we recommend booking on a TGV train from either the Gare de Lyon in Paris, or if flying overnight into Charles de Gaulle airport, take the fast train from the TGV station at the airport, both of which can arrive at Avignon TGV station early afternoon (the TGV bookings for this period are not yet open; we will let you know when they are open). You can also fly to Marseille from CDG and arrive independently at the hotel which is about 40 minutes from Marseille. We will greet the participants at the Avignon TGV station with the vehicle to be used for the rest of the tour, and transport them directly to our delightful Provençal château hotel, the “Relais de la Magdeleine”, for the first night. We will dine under the magnificent plane trees in front of the Relais, enjoying both an excellent dinner and the unique sensations of a Provençal evening. 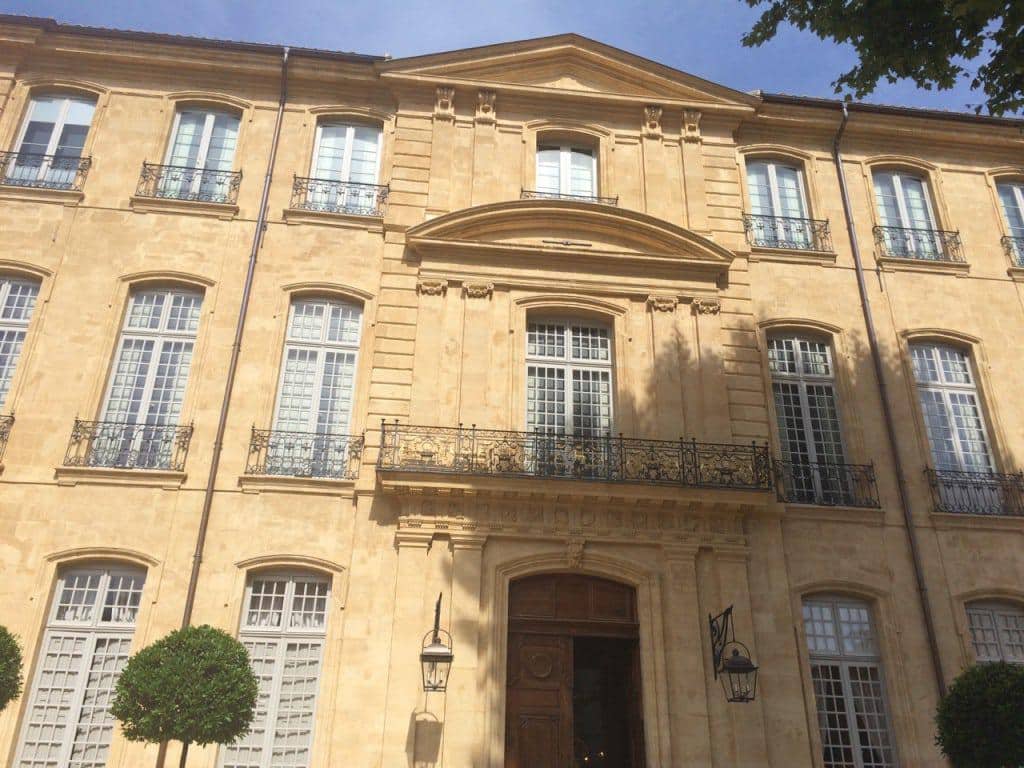 Vibrant Aix-en-Provence is our destination today. A thriving University town, it is another famous Roman location. We shall stroll up the Cour Mirabeau, with its flowing fountains, and visit the Musée Granet, dedicated to Cezanne, in the morning.

Lunch in the idyllic confines of the recently-renovated Caumont Arts Centre, an impressive Hôtel Particulier now devoted to art exhibitions. We will visit the exhibition after lunch, and wander around the town. 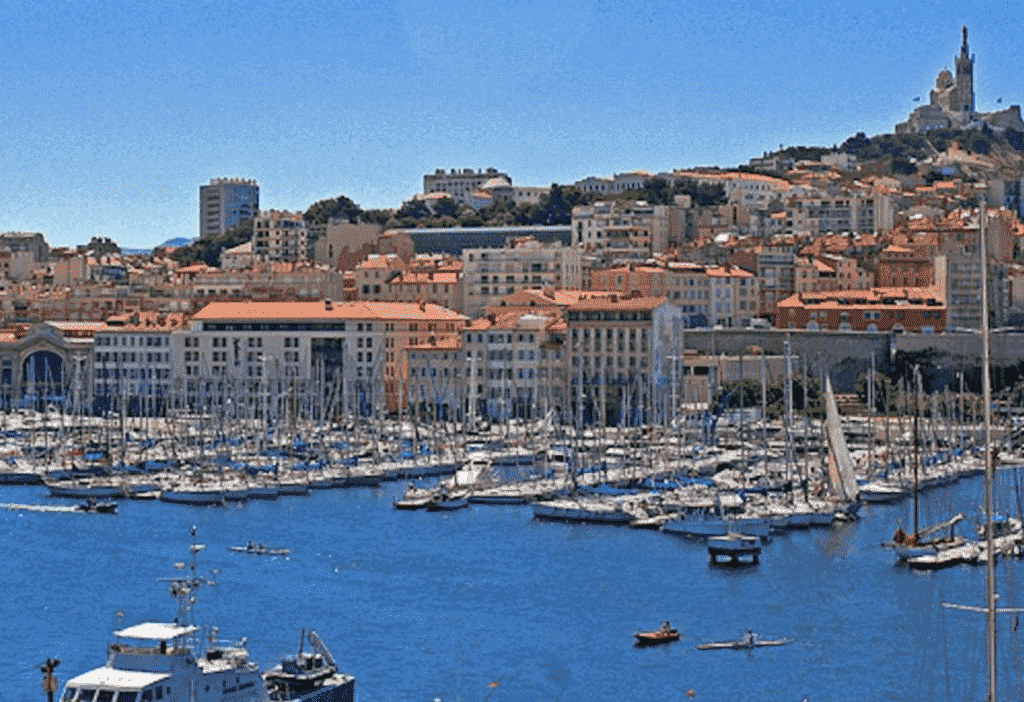 The Port at Marseille

The second largest city in France is Marseille and we will visit it today.  Located in stupendously beautiful scenery on the coast, its history reflects much of the civilizing influences of the Mediterranean world, including the Phoenicians, the Greeks and the Romans. From its picturesque old port to the stunning modernity of the “Museum of the Civilizations of Europe and the Mediterranean”, there is a plethora of sites to see, including many museums, art galleries, basiliques, abbeys and fortifications.

We will be shown around by a knowledgeable local guide, a personal friend of the Doulls and a native of the city, so will see more than just the tourist sites. Lunch overlooking the Mediterranean.

Dinner at the Relais.

A day devoted to Cassis, an historic fishing port. After an early start, we will take a boat tour of the “Calanques”, the beautiful coves between Cassis and Marseille, returning for lunch at a typical quayside seafood restaurant. For those who prefer to hike the Calanques, we will also offer that option.

Possibly a wine-tasting at a nearby wine producer followed by a dinner at the dramatic XIII century Château de Cassis. 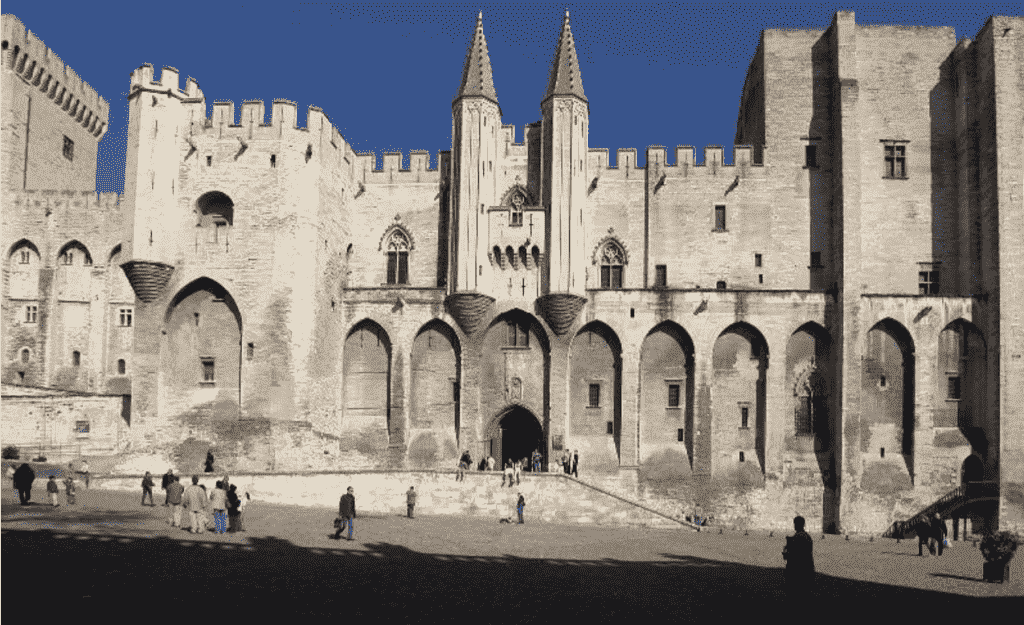 No visit to Provence is possible without seeing Avignon, home of the Popes for 68 years in the 14th century (sundry Anti-Popes stayed there for another 50 years). That was enough time for them to build an impressive palace and for the Cardinals to construct their lesser palaces in the area.  Perched on the river Rhone, Avignon has been a critical location for millennia. We shall visit the Papal palace, and the famous Pont d’Avignon

Lunch in the Michelin-starred restaurant of the Hôtel Mirande 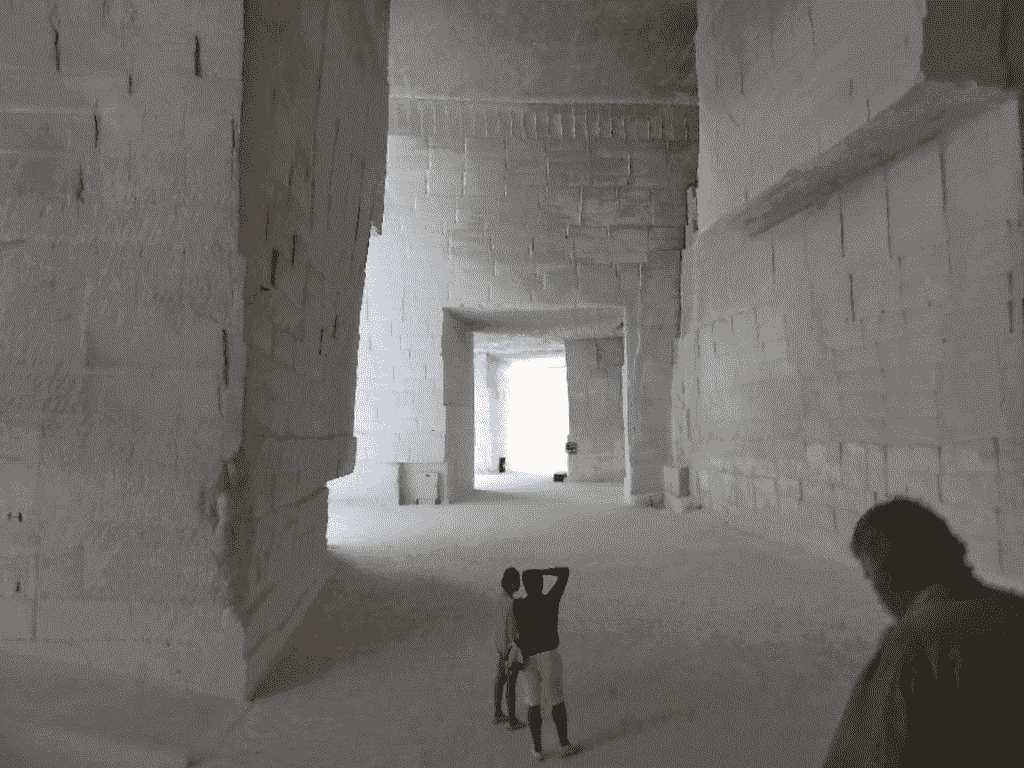 The Quarry at Les Baux

In the afternoon, we will visit nearby Les Baux-de-Provence, the legendary home of the Lords of Baux who constructed their medieval castle on a site that dominates the area. After visiting the castle and town, we will visit the most unusual, and visually stunning, “Carrières de Lumières”, a high technology multimedia performance of Chagall’s Art in the ancient and giant caves that were quarried to build the town.

We will be staying at Baumaniere, a legendary hotel, and will dine at one of its two restaurants, Le Cabre d’Or. 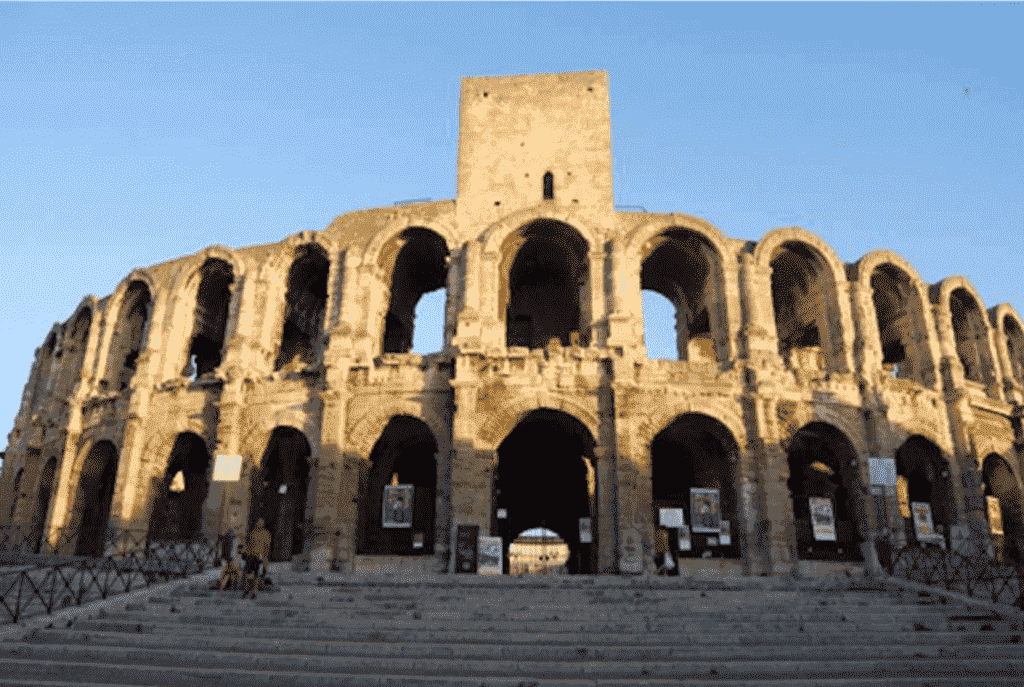 The Arena at Arles

Arles, with its famous Roman buildings, especially the Arena, is our focus in the morning. This town was a major Roman centre, as evidenced by the many such monuments. Strolling its streets is magical. Vincent van Gogh produced more than 300 paintings while he lived here, and we will visit the attractive “Espace Van Gogh” too.

There will be time for a stroll in St. Remy-de-Provence on the way back to our hotel, and a visit to the ruins of the adjacent Roman town of Glanum.

Dinner at a nearby casual restaurant. 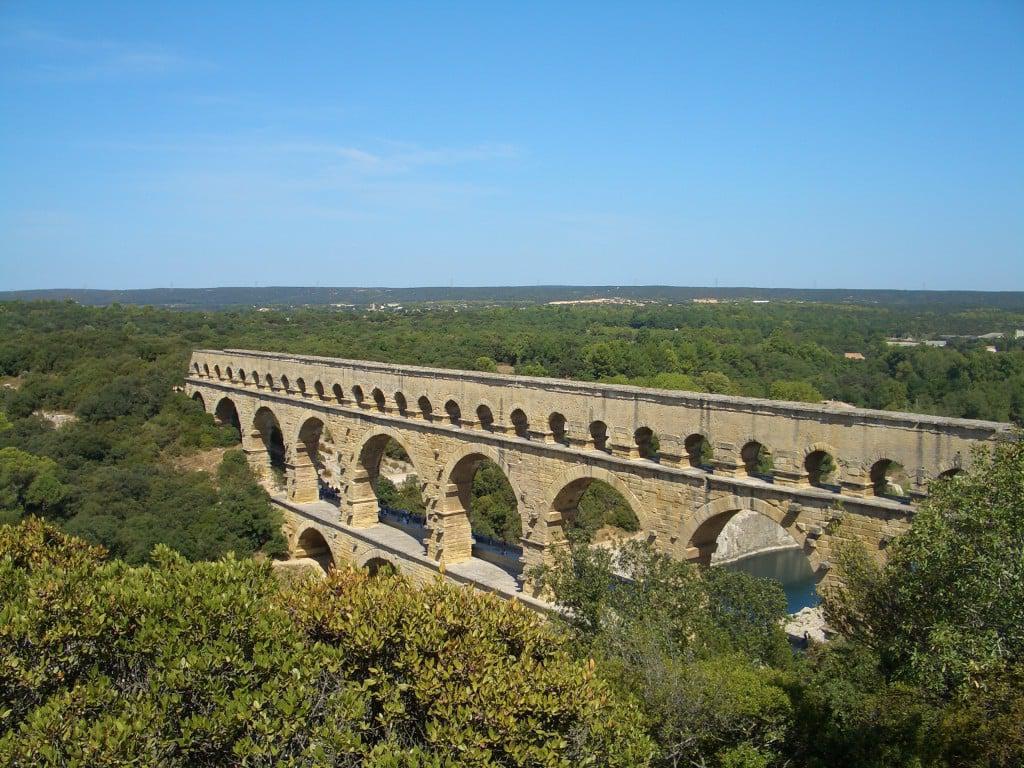 The afternoon will be spent at Nîmes, another important Roman Town. We will visit the “Maison Carée” (a wonderfully preserved Roman temple), the famous amphitheatre, and the Norman Foster-created modern art museum, “Carrée d’Art”.

Lunch in Nîmes, after which we will drive to Uzès. We will stop en-route to see the dramatic “Pont du Gard”, a UNESCO World Heritage Site, the second most visited national monument in France, and the best-preserved example in the world of a Roman Aqueduct.

Informal dinner in the evening 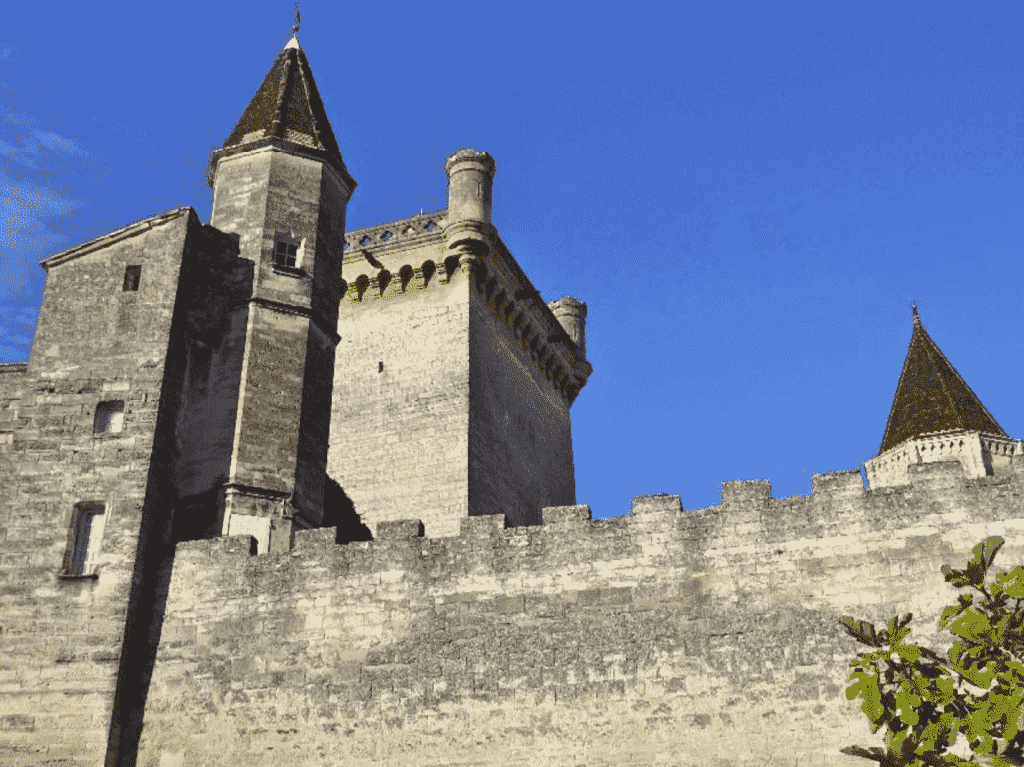 This is Market Day in Uzès, which has one of the more renowned markets in the South of France.  After breakfast at leisure at the accommodation, everyone is free to browse the market and wander around the town, including visiting the Bishop’s Tower, the Medieval Gardens, the Cathedral, and the town’s park, where the Roman aqueduct to Nîmes begins.

Lunch will be at a local restaurant.

We will have scheduled a visit, sometime in the afternoon, of the impressive Palace of the Duke, who has the title of “The First Duke of France”, and possibly a wine-tasting at a local winery.

Apéritifs and dinner at the Doull’s home concludes the day.

The vehicle will be available to take guests back to Avignon TGV station in the morning.

Note that we are happy to discuss and organise your pre- and post-tour arrangements too.

This region is one of the most sought after parts of Europe for visiting, and living. An important colony for the Romans, it remains an important attraction today for French and foreigners. The Roman colony of Provincia (hence “Provence”) was established in 120BC at Aix-en-Provence. The Romans left their mark in countless monuments, including such notable edifices as the Arena and the “Maison Carré” Temple at Nimes, the Pont du Gard Aqueduct, the Theatre at Orange, and the Amphitheatre at Arles.

Extraordinary architecture in Romanesque and Gothic styles can be found all over the region. One of the notable features are the hilltop medieval towns and villages, vestiges of the violent period of more than a thousand years following the end of Roman rule. These are fascinating and attractive spots for visitors, some notable examples being Roussillon, Gordes, and Les Baux-de-Provence. Dramatic fortified castles can be found at Tarascon, Sisteron, Barbaren, Murs, Thouzon and of course the Palace of the Popes at Avignon.

This extraordinary panorama of history is accompanied by dramatic landscapes and the gastronomique bounty of nature. The cuisine of Provence is renowned not only for being one of the tastiest and most delightful anywhere, but also as one of the healthiest – an enviable combination!

UZES: Uzès is a town for walking, and the immediate area is one for biking. It offers twice weekly, one of the best markets in Provence. Spoil yourself by trying the local wines. There are enough gastronomic restaurants in the area to keep a gourmand very happy indeed!  These are some of the reasons the UK’s Guardian newspaper designated Uzès as the #2 destination to visit in the world in 2014.

ARLES: This town was a major Roman centre, as evidenced by the many monuments, especially the Arena. Vincent van Gogh produced more than 300 paintings while he lived here.

AVIGNON: Avignon, the City of the Popes, sits along the Rhône River and was home of the Popes for 68 years in the 14th century, leaving behind the Palais de Papes (Papal Palace), once a fortress and palace. The picturesque Pont d’Avignon and location makes Avignon a must-see.

NIMES: Nîmes is one of the most historic towns of France. Its Roman history is reflected today in one of the best preserved of the Amphitheatres of the Roman world as well as the only fully-preserved temple of the ancient world, “La Maison Carrée”.

ST.REMY-DE-PROVENCE: If you do not yet know St.Remy-de-Provence, a marvelous treat awaits you. If you have been there you will certainly want to return. Famed for Van Gogh’s Starry Night, this beautifully picturesque village is at the heart of Provencal lifestyle. 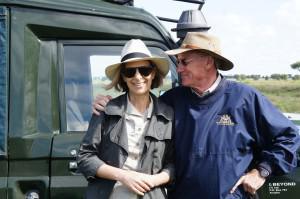 Adrian and Susan Doull are South African and American, respectively. They have lived in many countries and have travelled extensively, currently residing in charming Uzès. They have considerable experience in tourism, having created a château hotel in France and participated in numerous French Government tourist delegations around the world. Susan, a graduate student in Art History, founded Commendable Rentals LLC, a vacation rental marketing business some 9 years ago. Adrian has lived more than 17 years in France, and is particularly keen on its history. 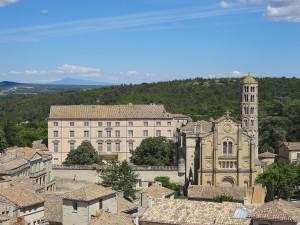 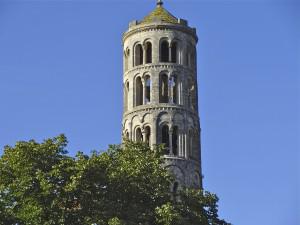 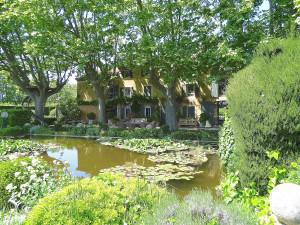 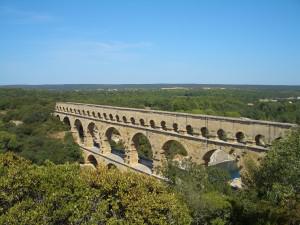