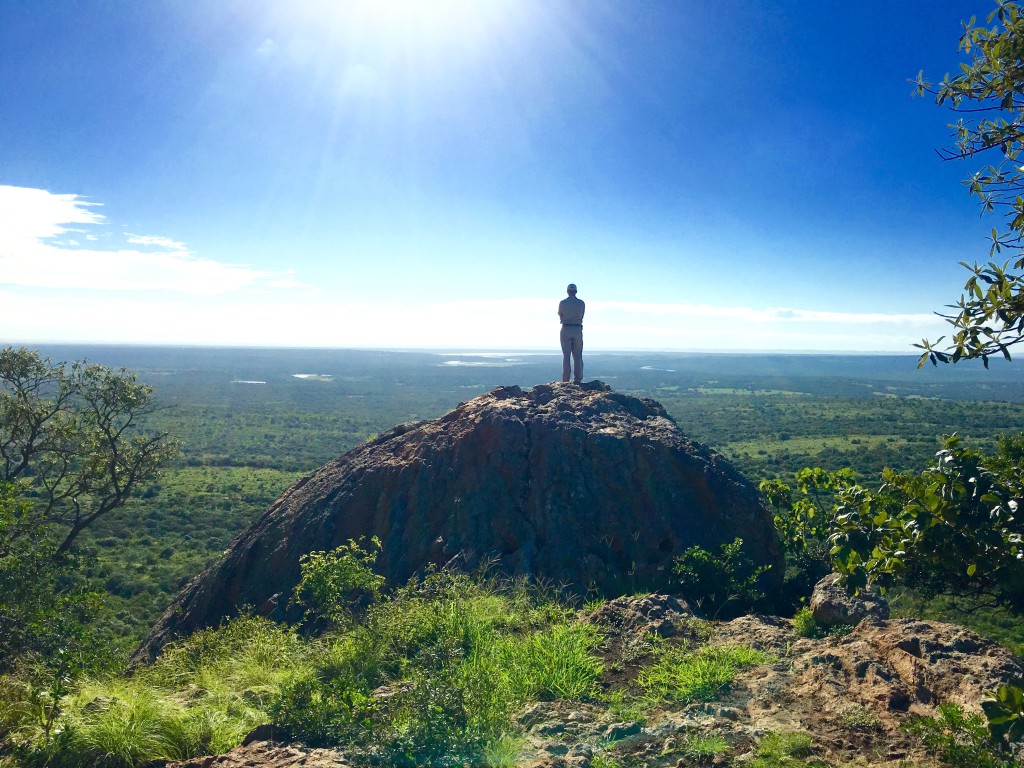 From the drought-ridden Mediterranean climate of the Cape, we flew north-east to the sub-tropical paradise of the Province of Kwa-Zulu Natal (“KZN”), landing at the coastal city of Durban. Our experience over the next week was “water, water, everywhere” as KZN took the opportunity to fill up all of its dams. Durban is nearly as large a city as Cape Town, but with a very different ethnic makeup and a very different climate. It has the largest Indian population of any city outside of India. 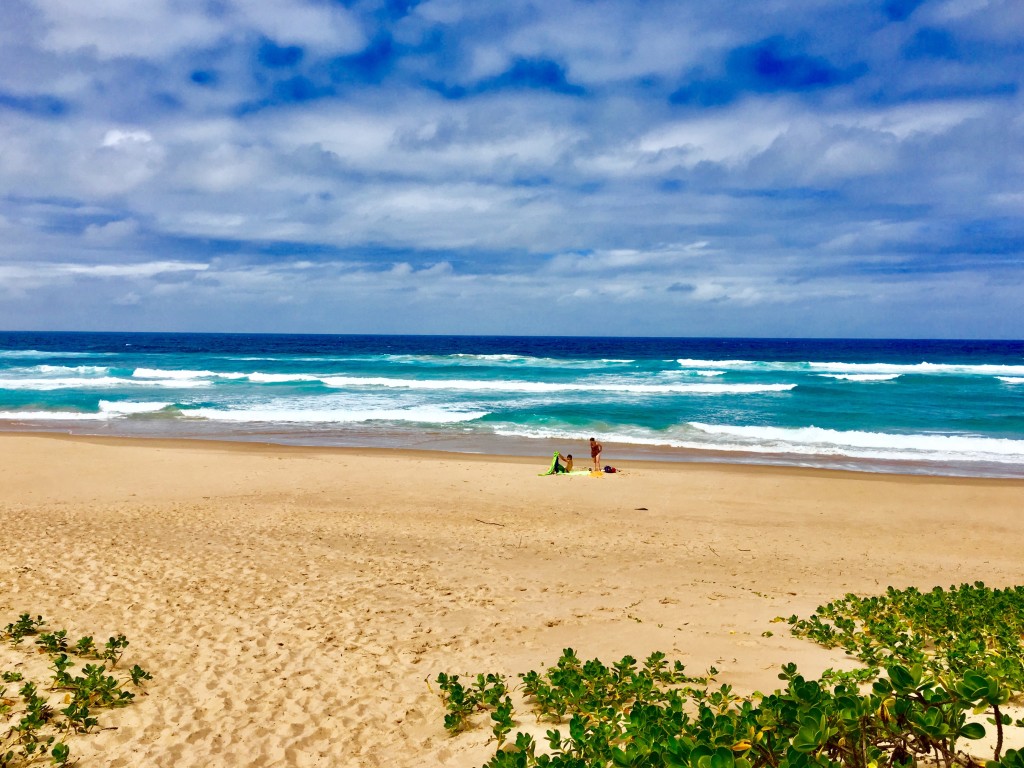 We stayed at the Zimbali resort north of Durban in order to have a curry dinner and were rewarded with the best curry of my life ! Zimbali is an attractive resort, run by the Fairmont Group, and is very American, meaning that the air-conditioning in the interior is absurdly cold. We managed to foil this dastardly habit by dining on the terrace in the soft warm air, with the air off the Indian Ocean contributing a cool breeze from time to time. Now that the Fairmont has been acquired by the Accor Group, from France, it is to be hoped that they will realise the health and financial advantages of not having freezing air-conditioning in their properties, at least outside of America !
KZN is an exceptionally attractive Province, with both its Drakensberg Mountains and the Coastal areas being World Heritage sites. In between the two, it is a land of lush rolling hills. Of course, the largest population group in KZN are the Zulus, and we headed up the coast the next day, deep into the heart of Zululand. 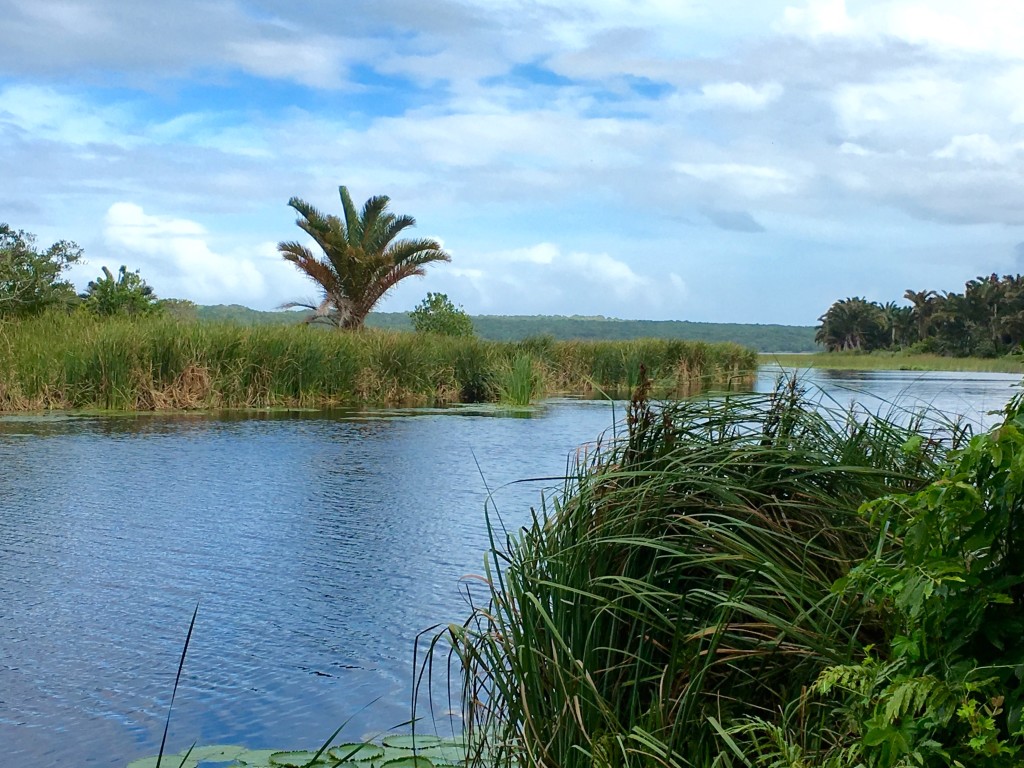 We had chosen to stay at Kosi Forest Lodge, which is within the coastal Isimangaloso World Heritage Site, and is only a few kilometres south of the border with Mozambique.  The Lodge is adjacent to an ecologically fascinating lake system of 5 interconnected lakes leading to the sea, moving progressively from fresh, through brackish, to salty, with​ the different salinities gives rise to differing flora, and fauna.
We spent a day exploring the lakes, learning of the local’s ancient and creative fishing habits, as well as investigating the grouchy Hippos, and walking on the stunning Indian Ocean beach. The lake waters are crystal clear throughout, and the fish are easily visible. Another day was devoted to a walk through the rare and unusual Raffia Forest, and canoeing, perilously, on the channel between the first two lakes. 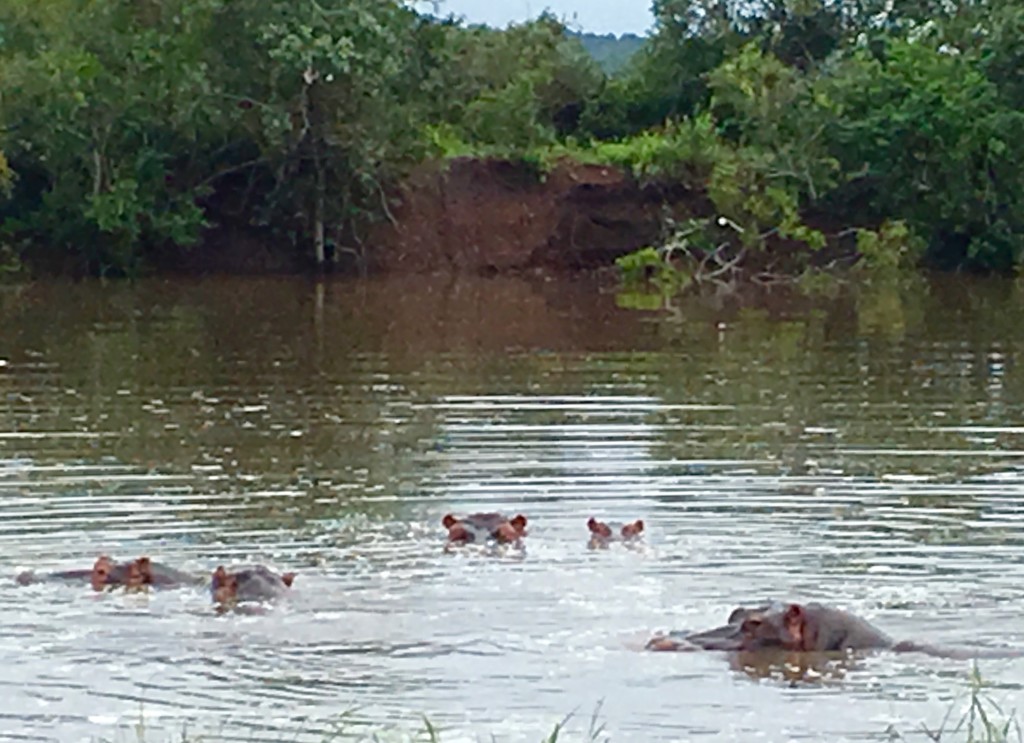 While driving in northern Zululand, one is struck by the remarkably limited amount of agriculture on what is reasonably fertile land, having passed vast acreage of sugar cane and timber forests closer to Durban. One of the main reasons for this is that in the north, the land is held in trust, the sole beneficiary of which is The King of the Zulus, so that “residents”, and potential farmers have no legal property claims that can support borrowings for the development of the land. “Land Restitution” is currently a significant issue in South Africa. 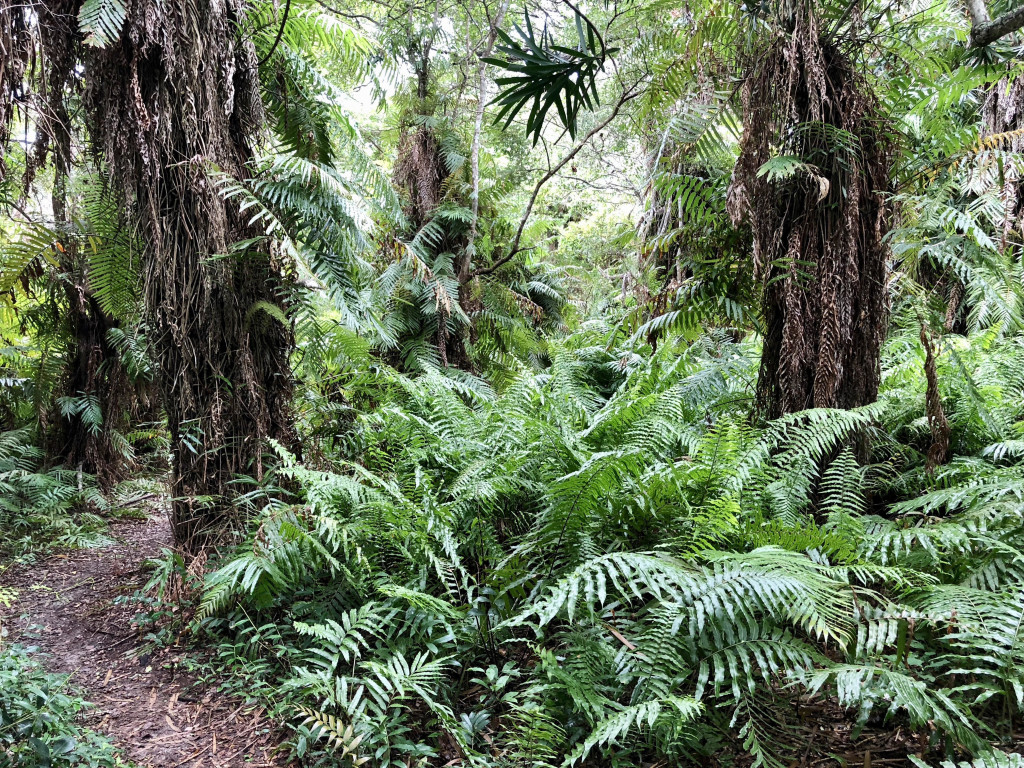 From Kosi, we headed south for a couple of hours drive, to the “piece de résistance” of the trip, The Phinda Private Reserve. We have selected Phinda many times in the past for our “Commendable Travel” Guests, always to rave reviews and this time was no different, despite the extraordinary amount of water everywhere. 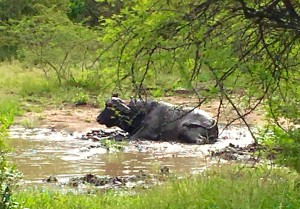 There were lakes where none had existed a few days before, and a plethora of puddles. We had a few brief showers on Day 1 and Day 2, but day 3 dawned as a perfect day and the full beauty of the landscapes shone through. More importantly, some of the animals who had chosen to try to stay dry by hiding under trees, came out in force. So the Impala, Nyala, Zebra, and Giraffe were omnipresent, as were the Buffalo herds, although separately we spent some time observing a gentleman buffalo profiting from a very large puddle by having his early morning bath right side up, and upside down, to his very obvious enjoyment. Happy male buffalos are not a common sight in the Bush ! 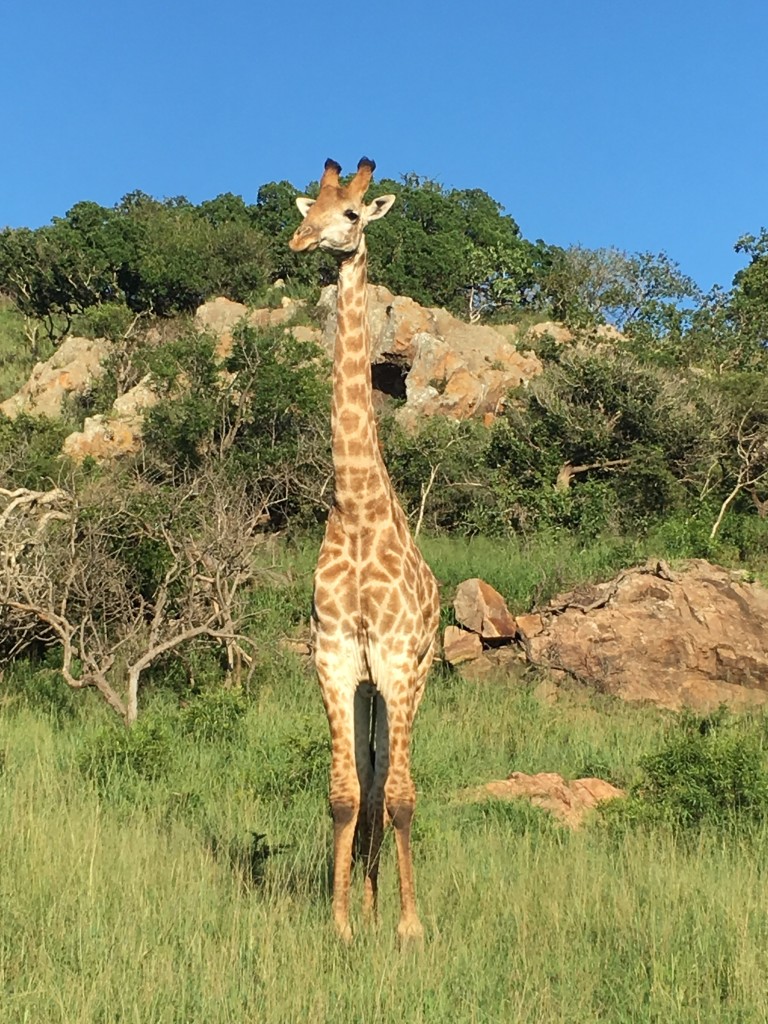 The elephants were their usual sedate selves, consuming large amounts of leaves and grass, 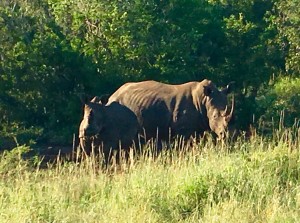 and making plain their rights of way when our vehicle was on their intended route. The Rhinos were quite rightly not interested in getting too close to us, so 40 yards was the closest we could get to a magnificent female with her calf. The terrible poaching of Rhino horn, and consequent slaughtering of the Rhino, by sophisticated criminal gangs in order to feed the demand from China and Vietnam has been a major problem in southern Africa. Phinda has already dehorned, with veterinarians, a number of its Rhinos, to make them less likely targets for the poachers. 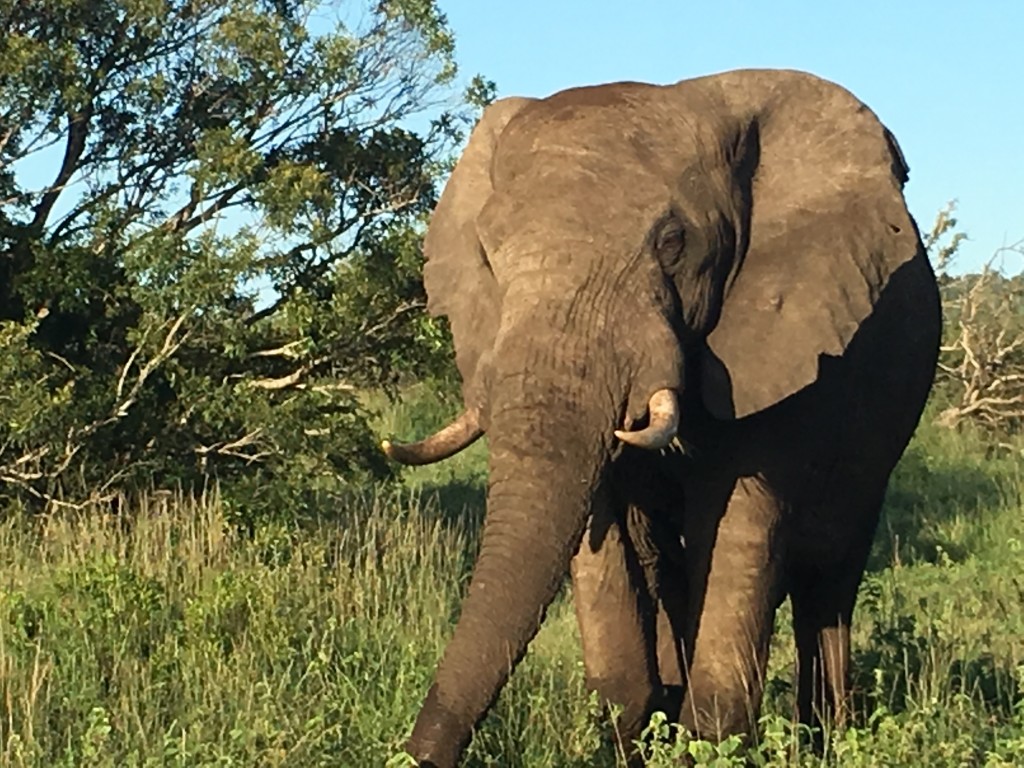 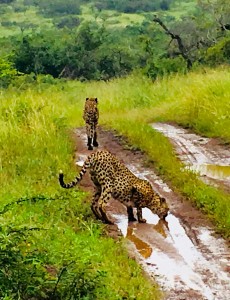 And of course, there were the Cats. We were able to locate and follow a pair of cheetahs, brothers, as they ambled through the bush and then on the road. Their graceful, streamlined bodies hinted at their steel-coiled running power even at walking pace.  Finally, we had two very different exposures to Lions. The first was totally unexpected. After turning a corner we very nearly ran over the dominant male Lion of the area ! He was in the process of marking his territory, a necessary task after so much rain. Happily, he moved 3 or 4 yards off the road and then stood admiring his domain and rendering us not the slightest interest, but providing a good photo of the Boss of the Bush at work. 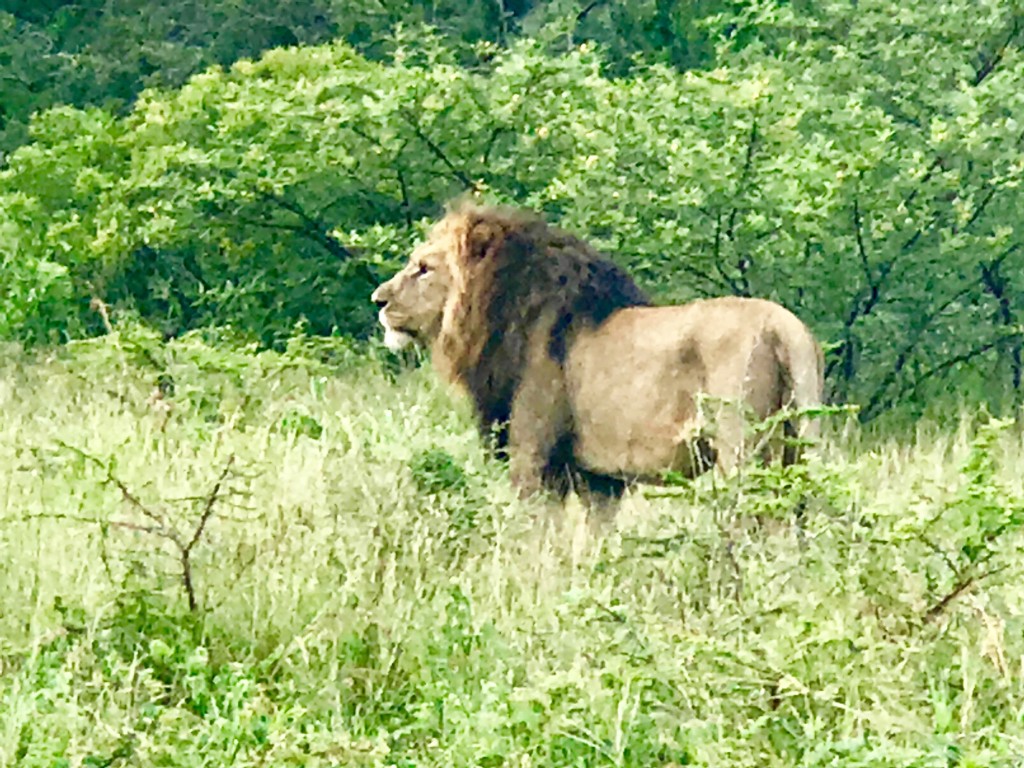 The second sighting could not have been more different  – 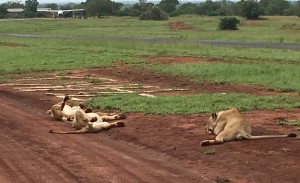 two females and one male lion were doing what lions do most – sleeping – but somewhat inelegantly – upside down, with their legs in the air ! The wildlife experience, as with all of the more than 50 times I have been to wildlife viewing, was fascinating. Our young female Ranger ​was both knowledgeable and entertaining.
In addition to the ark-like number of species to see, two of Phinda’s great advantages are the truly lovely landscapes with dramatic vistas, and the attraction of the Rock Lodge itself. 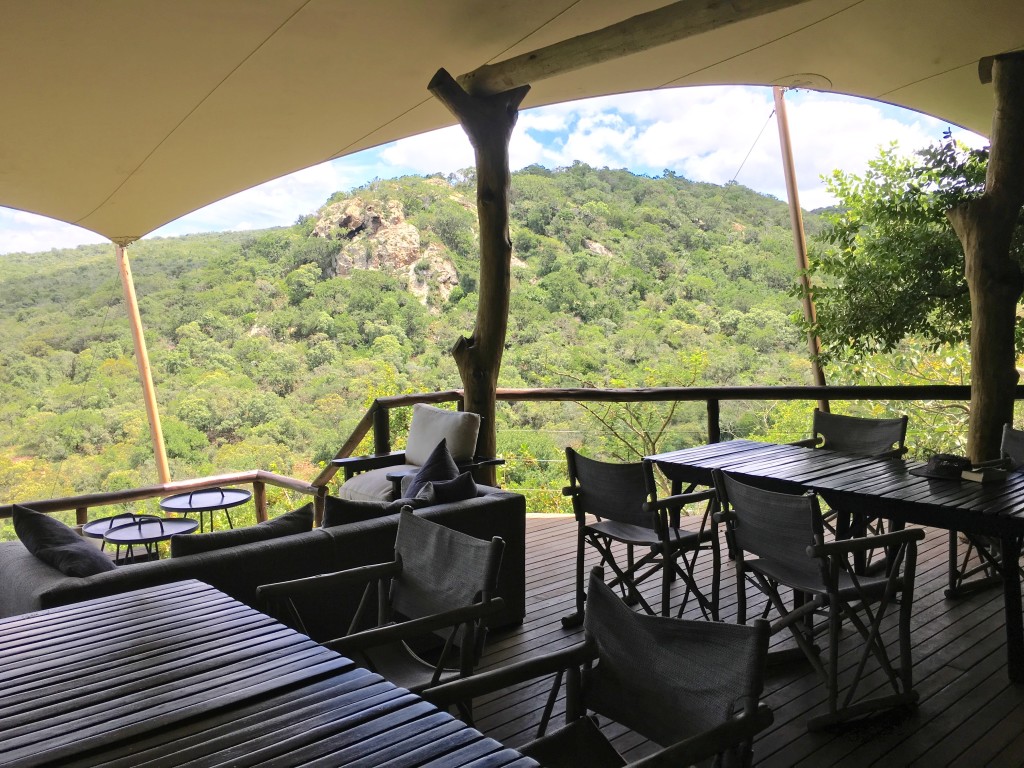 There are only 8 suites, each in a self-contained house a few steps from the lodge itself. The suites are spacious,  and elegant yet fully African in feel, in subtle greys, and natural African materials. The  large bedrooms with separate dressing area, open to a private terrace with lounge beds and plunge pool, all looking out on the green KZN​ hills.  With indoor and outdoor showers, full size tubs, and outdoor plunge pools, there are many options to use water, a real luxury after the 90 second showers of the Cape!
The Lodge itself has a large sitting room, complete with many books and a large selection of drinks, along with an elegant formal dining room with elegant embroidered, high back chairs plus a dramatic terrace where we had lovely breakfasts, and delicious lunches, overlooking the nearby cliffs. Finish this all with constant high level personal staff and management, and all in all, it is a privilege to experience such a stunning place. 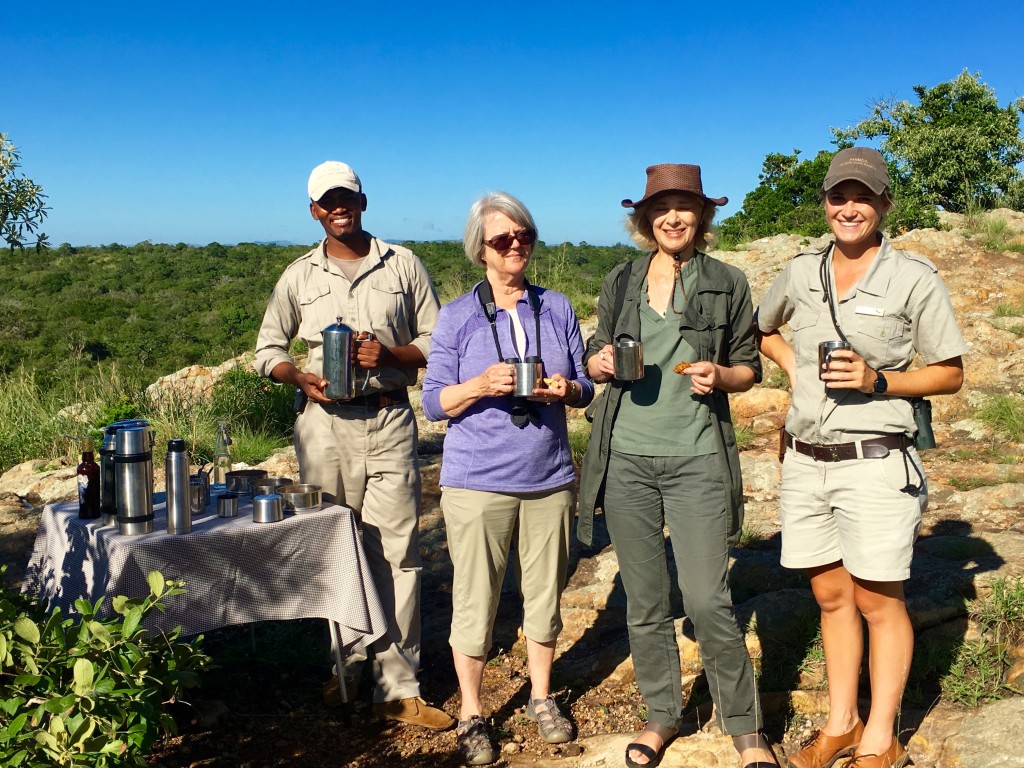 From the wilds of Zululand, we travelled to Johannesburg, the sophisticated business and financial centre of the country, for two nights.  Some wonderfully informative museums here, like the Apartheid Museum, the Hector Petersen Museum, and the Constitutional Court explain the more modern history of the country. A visit to the Constitutional Court is a heartening experience as this still young country relies on its excellent constitution to thwart political corruption efforts. We relaxed in the supreme comfort, and funky decoration of The Residence Hotel.
The performance of the Judiciary and the Media in upholding a democratic society have been hugely effective in South Africa. We are grateful for the efforts of the Constitution writers in ensuring that South Africa remain​s a country of laws. 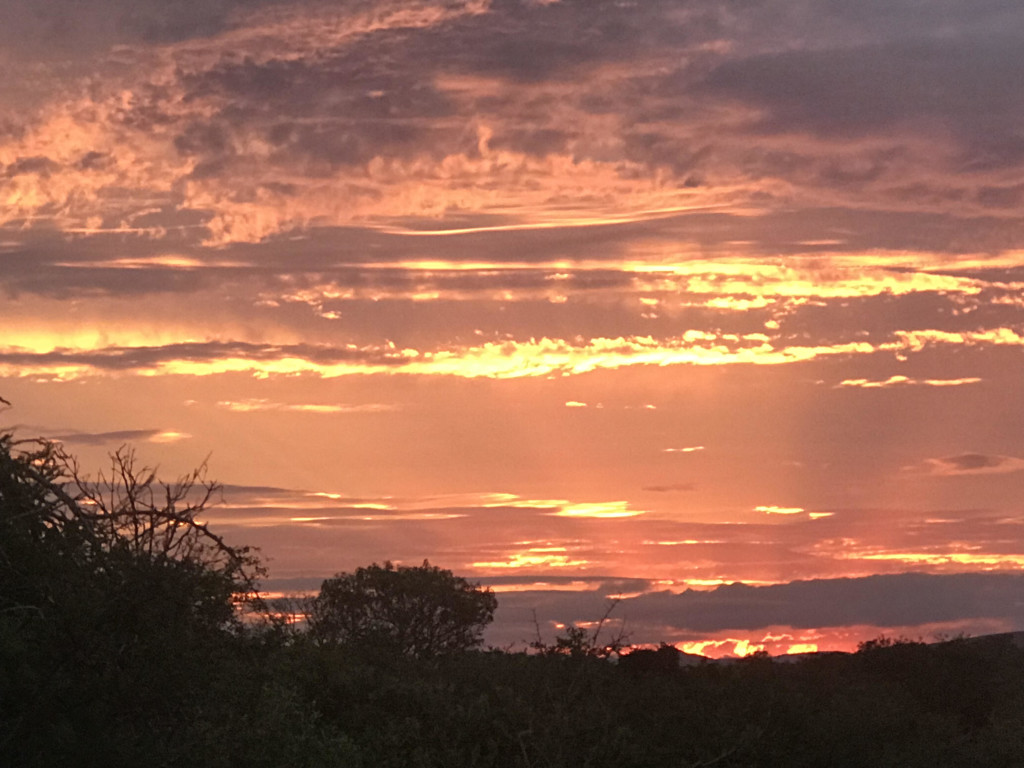