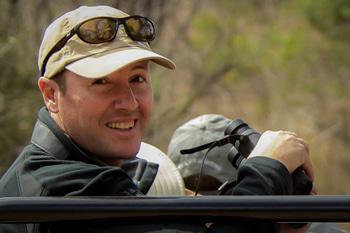 It has always been about curiosity for Marco, an early childhood of escaping his hometown of Johannesburg to savour vacations in the Kruger National Park and join his first Wildlife Club at the tender age of 8, its youngest member at the time. This lead him to reserves around South Africa and ignited the desire to understand all things wild. His curiosity to explore and understand more of Africa started an adventurous 13 year career as a professional guide that has lead his across a myriad of habitats, from South Africa, to Botswana, Namibia and Zambia.

After completing his education, his first few adult years were spent working, living and travelling throughout Southern Africa, the Middle East and extensively across Europe. This gave him a vital understanding of the greater world and a keen interest in people and cultures across the globe. He returned home to satisfy his urge to understand the workings of the natural world, this lead him to his first guiding role in KwaZulu Natal in the Umfolozi/Hluhluwe Game Reserve, at an age of 21, where he was exposed to this incredibly diverse ecosystem allowing him to build a vital bank of knowledge to initiate his pursuit in understanding the natural world.

In his years spent in the Kruger National Park and the Kalahari, a love for tracking and walking safaris emerged, this developed an intimate understanding of animal behaviour by exploring and marvelling at the intricate relationships of all life. It was during this period that he had the opportunity to develop a love for camera work and documenting the natural world, as well as collaborating on major documentaries and working behind and in front of a camera as director, cameraman and presenter for Wild Earth TV.

His career as a guide has allowed him the privilege to explore and understand some of Africa's most pristine wilderness areas, but most importantly, allowed him to affirm his belief in conserving our natural heritage through eco-tourism by teaching and not just simply telling. This allows him a platform through which he can create incredible wilderness and travel experiences, as well as inspire a genuine love and understanding of our natural world.

Commendable Travel has experienced many Guides and Rangers in its decades of travelling to Southern Africa, but few have impressed us as much as Marco Tonelli. His wonderful knowledge of not only the ``Big Five``, but of smaller fauna and the insects and birds that share their ecosystems will fascinate any visitor. Allied to his dedication to the interests of his guests is a ``can do`` mentality that has endeared him to many of Commendable Travel's guests.